CRESTVIEW
▸
ABOUT
▸
A Lifetime of Service 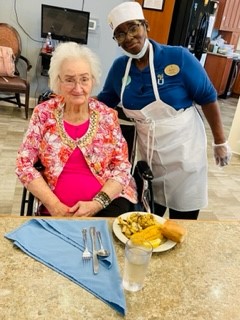 A Lifetime of Service

According to the most recent data from the U.S. Bureau of Labor Statistics, the average American spends about 4 years at any one job. Whether it’s desire for change, drive for so-called “upward mobility” or other circumstances, Americans generally don’t stay put when it comes to work.

Take those four years, multiply them by ten and then add a few more and you’ve got the opposite of those   statistics in Bettie Ford. Ford, who graduated high school in 1977, went to work immediately at Crestview.

“I spent a bit of time in housekeeping but quickly moved to the   kitchen,” Ford recalled. “That’s where I’ve stayed, and I love what I do. More importantly, I love the people. The residents, my fellow associates…it’s about the people.”

While Ford may be a bit of a unicorn in a workforce that’s become accustomed to mobility, she doesn’t think of herself that way. When talking with her, humility is apparent almost immediately. “I’m the one who’s lucky,” Ford said. “How many people find such a great fit so early in life?”

If the community is a family (and it certainly prides itself as such), Bettie is undoubtedly one of the matriarchs.

“I’m just a lucky lady,” Bettie stated. Ask anyone at Crestview and they’ll tell you they’ve been the lucky ones – getting to see Bettie each day certainly makes one feel more than a bit fortunate.

Ford does admit she’s eventually leaving Crestview – not for another opportunity, however. “I’ll retire eventually,” she said. “They probably don’t want to see me go, but I’ll hang up my hat eventually.” Bettie is right about that – goodbyes are hard, especially after 45-plus years.