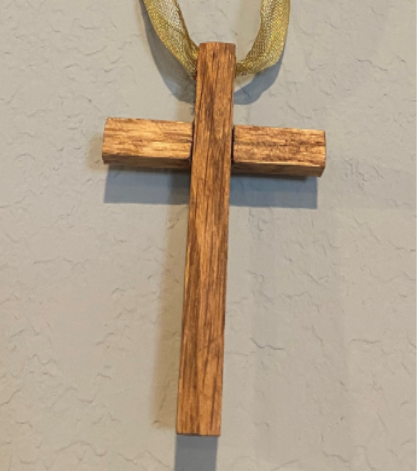 In 2011, after years of planning and construction, an excited team packed up their offices and prepared to move into a brand new building on East Villa Maria Road in Bryan. Crestview residents were also eager to get settled into their new home with updated amenities and finishes.

The original Crestview building opened in 1962 at the same location where the community can be found today. Almost 50 years later, the community would be repositioned with the healthcare areas constructed first, known as Crestview Court, allowing the occupants to move over to their new space. Then, a crew would demolish the original building to later build the Independent Living neighborhood known as Arbor Oaks at Crestview.

Before the demolition could take place, Cheryl Clark, Nurse Consultant for MRC and long-time employee of Crestview, took notice of a wooden cross that hung in the old building. Rescuing the cross from impending destruction, she and her husband Wayne took it home for safe keeping. Wayne also took down the Chapel paneling and carved smaller, pocket sized crosses to give to the team members who would cherish the symbolism. After the new Crestview Court was completed, the cross was hung in the new healthcare chapel along with two stained glass windows rescued from the original Crestview Chapel.

“That cross hung on the wall of a building where such sacred ministry took place. Countless souls came to Crestview to heal, some to find needed care and many to live out their final days. The symbol of these smaller crosses to us is about carrying on a legacy to show Christ’s love to all who enter here as we have done for 60 plus years,” expressed Clark.

The team didn’t just stop there, they also had every resident sign a beam that would later serve as a crucial support beam in the new building. While the beam is now covered by sheetrock and paint, the original team members remember it fondly.

Matthew Currie, MRC VP of Operations who was Executive Director of Crestview at the time recalled, “It was very symbolic to us because the residents have always been the most important thing, in other words, the support beam that holds us up.  It only seemed fitting to have their names forever marked on this beam because Crestview, and Arbor Oaks, would not be what it is today if it weren’t for the incredible residents who have chosen to call it home over the years. Without them, it’s just a building but because of them, it’s a home.”