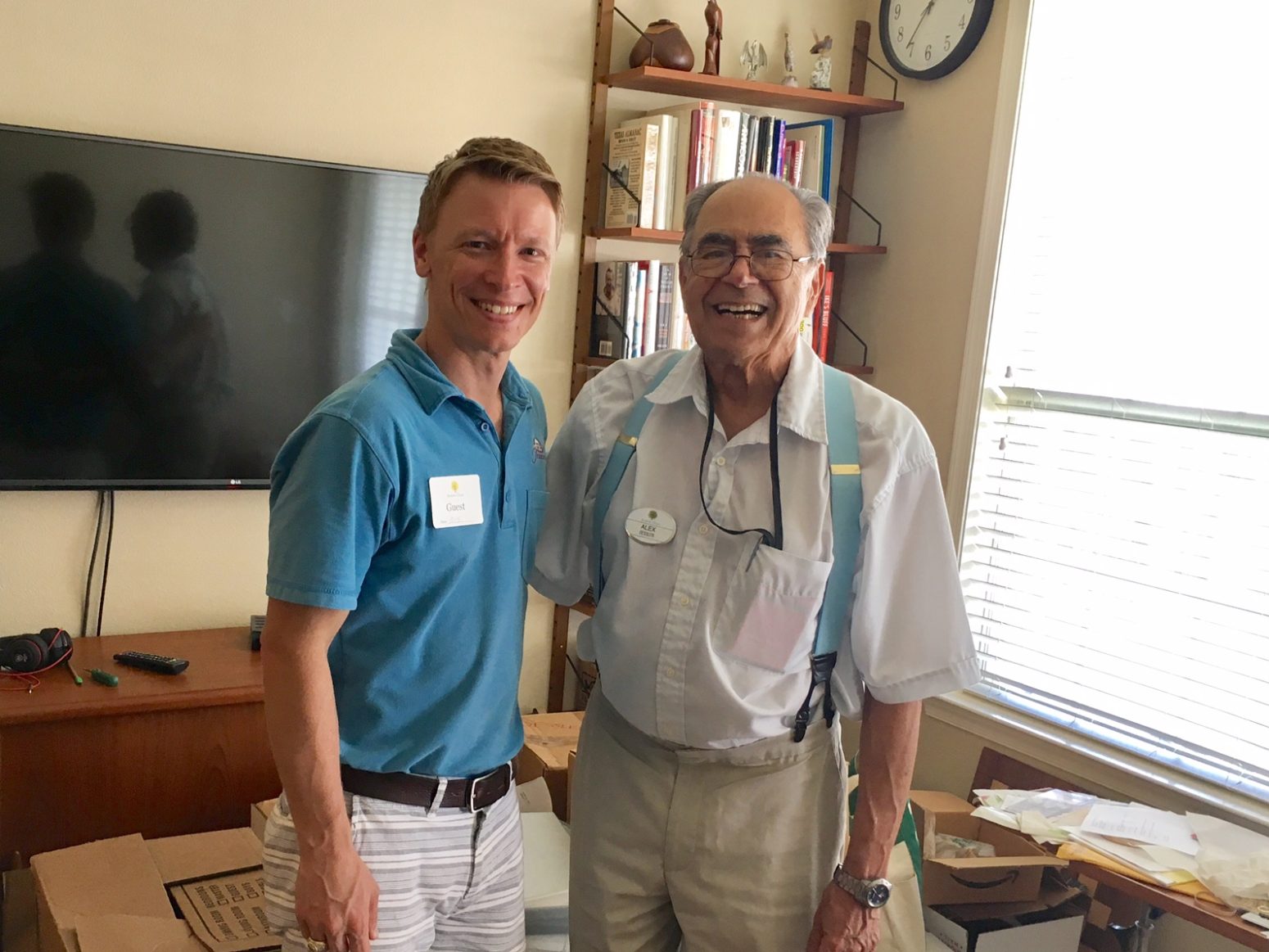 Relocating to a retirement community almost always requires seniors to pare down their possessions, a process generally called “downsizing.” Relocation consultants prefer the term “rightsizing,” but some who are contemplating the process often refer to it as “dread.”

“Downsizing is tough, because you have an emotional attachment to your stuff,” said Alex Dessler, a resident at Arbor Oaks Independent Living in the Crestview Retirement Community in Bryan, Texas. “We lived in the same house for 10 years, and in the previous house for 30 years, and we seldom threw anything away."

Dessler particularly found it difficult to part with his Jamaican steel drum. “I could play ‘Row, Row, Row Your Boat’ on it,” he chuckled.

Dessler and his wife, Lorraine, moved to Arbor Oaks two years ago, after waiting 13 months for an apartment to become available. He decided the time was right for the move, but Lorraine was less enthusiastic.

“I began noticing how long it took me to get something done around the house,” he said. “You can hire people to come in and do the things you can’t do anymore, but you don’t have the companionship. Here, you get to meet really interesting people and interact with them in group activities.”

Ah ha! Now we begin the enjoyable part of downsizing. It generally starts with the move-in process where new residents get introduced to the community through welcome gifts, orientation briefings, and ample amounts of assistance from staff. Then the neighbors start dropping by to get acquainted.

“The other residents are the biggest help in getting acclimated,” said Dessler. “All the people are kind and friendly. We’re settled in now and we’re doing fine.”

For those contemplating a “right sizing” move, Dessler recommends turning to experts for help. He said it notably reduced “our emotional turmoil.”

“The best scenario is to start the process of paring down two years in advance of when you see yourself moving,” said Jared Meyer, with Caring Transitions, a franchise designed specifically to assist seniors in right sizing for the move to a retirement community. Meyer helped the Desslers prepare and then, handled their move.

“It’s a challenge to know where to begin when planning for a downsize, so often people put off making the necessary decisions and carrying out the steps that will help reduce the stress of the move. We provide a recommended packing list and advise them to take it one small project at a time. Start with a closet, for example, then reward yourself when you’re done. But don’t start with a curio cabinet full of family heirlooms, because you’re going to become disheartened and tempted to quit.”

Meyer admits that many times the move to a retirement community is done with an “it’s time” resolve. As with the Desslers, Meyers points out that it’s rare that both parties are ready at the same time to make the move. He also says some of the most difficult moves occur when adult children push for it. His best advice: Make the move before your health or advanced age forces it.

“The younger folks generally find it a life-giving experience. They find a community, activities and people like themselves. The longer you wait, the harder it is to get that positive experience.” In Meyer’s experience, he notes nine out of 10 who make the move to a retirement community ultimately end up loving it.

True, some view giving up decades of possessions as an agonizing experience. Instead, Meyer encourages people to view “giving up” as a way to enhance the lives of others by providing them the opportunity to enjoy your possessions as much as you did.

“As a retired physics professor, I had an enormous collection of books,” said Dessler. “Texas A&M University wanted many of them to add to their military aviation collection. I’m pleased that the books have a happy home, and A&M was overjoyed to receive the collection.”

For Dessler, the years of reading those books has provided a storehouse of facts that he now uses to compete effectively in the community’s Trivial Pursuit games.

“We have lots of laughs playing that game, and there are many other entertaining things to do here. I tried water aerobics because my knee and back hurt when I did regular aerobics. Afterwards I thought to myself, ‘Man, is that good! The endorphins are flowing and nothing hurts!’”

Yes, the Desslers endured the agony of downsizing, but they’ve become quite ecstatic about their new life at Arbor Oaks, so much so that they wish they had moved there sooner.

“We waited too long. You should move before you need to, before you have too much trouble maintaining the house. The whole process of downsizing is strictly emotional, not logical. Once you get started and come to terms with it, it goes pretty quickly. And after you move in, you find you don’t miss much. Occasionally I miss something, but I have fewer and fewer of those flashbacks.”