CRESTVIEW
▸
ABOUT
▸
Sanctuary for the Journey 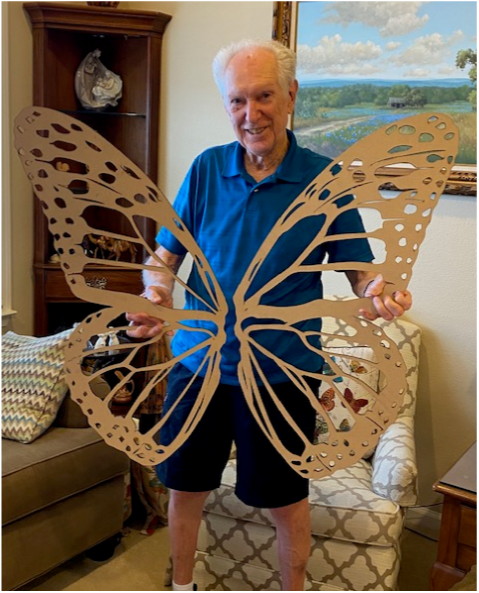 Sanctuary for the Journey

The word “metamorphosis” has taken on a fresh, new meaning for  Arbor Oaks at Crestview in Bryan. When construction damaged the vegetation in the community’s courtyard area, it was left bleak and uninspiring. That’s when imagination took wing, as residents proposed a transformation  of  the  large,  half-acre  space  into  a sanctuary that would become an official Monarch Waystation, for Monarch butterflies during their annual migration.

“Our residents are truly amazing folks,” said Executive Director, Mike Adams. “When our courtyard space was damaged, two of our residents, Bill and Mary Jo Lay, had  the  idea  to  transform  that  space  into  a  ‘healing garden,’  an  idea   which  the   Resident  Association  immediately got behind. That grew into the idea of also making  the  space  a  sanctuary  for  beautiful Monarch butterflies in transit. The result is a space that nurtures both  butterflies and residents  in a way that is very meaningful.”

Residents Bill and Mary Jo Lay became aware of a Monarch  National   Project  developed   at  Kansas  University and advised residents of a national endeavor to   develop Monarch Waystations throughout the United States. Crestview residents reached out for assistance from Texas A&M students in the landscape architecture program, who provided design and development support. Together, Arbor Oaks residents and the students worked-by-side to create what has become a small    miracle of living beauty and nurture in their midst- an Official Monarch Waystation.

The plants chosen for the garden help the Monarch butterflies reproduce and increase the overall Monarch population. Today, hundreds of chrysalis pods bring the flutter of activity that brightens the Crestview courtyard each year.

The beauty of the Crestview Courtyard continues to evolve, as the daughter of a now-deceased resident paid tribute  to  her  father  by  making  a  donation  to  fully develop the Monarch Waystation. And she didn’t stop there. As an amateur photographer and artist that teaches at Texas Tech, she also came up with designs to develop large metal sculptures of the butterflies which will form the center of  the  garden.  The prototypes are already in place at the community and are being fully developed now.

“This inspiring project, which began with residents  seeking to create a garden area- and willing to pay for it on their own- became a project that has created a special connection between our residents and nature, and put their  Waystation  for  Project  Monarch  on  the  map,” Adams said. The Monarch Waystation Program was established in 2005 by Monarch Watch and has registered over 6,000 Monarch Waystations in 46 states.